menuSubjects
Welcome   >  Are you afraid of...

Are you afraid of developing dementia in your 70s? A study shows you need to act now. 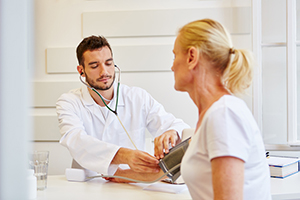 A new study suggests that people suffering from hypertension in middle age are at significant risk of developing a form of dementia when they’re older (20 years later).

It also shows, for the first time, that the earliest signs of damage to the brain can be detected by an MRI, even before dementia symptoms are apparent. “The neurological changes associated with hypertension are normally diagnosed when cognitive decline becomes evident or when conventional MRIs show clear signs of brain damage”, said study coordinator Giuseppe Lemboem>. “But in either case, it is often too late to stop the disease process”.

How can you prevent hypertension in order to lower your risk of dementia?

Nobody wants to one day fall victim to senile dementia. According to this study, immediately reducing your blood pressure will also lower your risk of vascular dementia which could develop within the space of several years or decades.

How can you do this? If you’re already suffering from hypertension, your doctor will no doubt have prescribed suitable medication, but there are a number of other measures which, provided they become habitual, can help you reduce your blood pressure quickly and durably. Some of these (which are also beneficial for people who are not yet hypertensive) are outlined below:

How about dietary supplements?

For those suffering from hypertension, there are two key supplements which have been extensively documented in the scientific literature:

Omega-3 fatty acid supplements (ADH and/or EPA). Scientific data (1-4) demonstrates unequivocally that omega-3 supplements reduce systolic pressure (by around 3.5 mmHg) and diastolic (by around 2.5 mmHg) in people with hypertension. On average, 900mg/day of EPA/DHA is sufficient to reduce blood pressure (ie 3 capsules of Super-Omega-3).

These supplements also have beneficial effects on several risk factors for stroke and other cardiovascular diseases: blood lipid levels, vascular function, inflammation, platelet function… These effects have been scientifically-recognised by the EFSA as have their benefits for blood pressure: the Agency’s independent scientific committee studied several meta-analyses before reaching their opinion (which can be accessed at ici et ici).

Co-enzyme Q10 supplements. Co-enzyme Q10 is relatively unknown yet it’s an antioxidant which the body produces itself and which has been shown in several clinical trials to be effective when used in combination with standard hypertension medication. Reductions in blood pressure have thus been recorded in individuals taking co-enzyme Q10 (almost 100mg/day, ie 3 capsules of Coenzyme Q10 30 mg) in several randomised clinical trials (5-8).

In terms of natural products, hawthorn leaf extracts (found in the supplement Tensix) are effective at optimising cardiovascular function (their use is recognised by ESCOP and the World Health Organisation) while the benefits of Bacopa monnieri extracts are well-established in terms of maintaining the cognitive system (9-14), as well as visual perception, attention and language (verbal understanding and vocabulary) and reducing impulsivity (15-16), improving concentration and reasoning (17), as well as alertness and speed of information-processing (18), associative memory (19), retention of new information (20) and even reducing the tendency to make mistakes (21-22).

How does hypertension lead to dementia?

It’s a process which has been studied for several years already but new mechanisms controlling its development continue to be discovered.

In hypertension, the blood exerts abnormally high pressure on the artery walls, making them fragile. Little by little, the diameter of the vessels which transport blood to the brain gets smaller as a result of thickening of the vascular wall, thus reducing the supply of nutrients and oxygen to cells in the cerebral hemisphere (23).

Over the long-term, this under-supply manifests in damage to the brain’s white matter: “in people with hypertension, we can see a deterioration in white matter fibres connecting areas of the brain involved in attention, emotions and memory” said Lorenzo Carnevale, the study’s lead author.

The majority of published studies report a link between raised blood pressure and poorer cognitive performance, even in young people. But it’s really after suffering from hypertension for several years that the dementia process starts to develop. In those unlucky enough to be affected, blood pressure starts to fall: what appears to be an improvement is in fact a sign that degenerative damage has affected the cells involved in regulating that pressure. The gradual decrease in blood pressure seen in dementia is in fact proportionate to the loss of neurons.

Individuals most at risk are those who develop hypertension before the age of 60 (24).

The article at the centre of this study

Coenzyme is an oil based supplement,with three times the bioavailability, that helps: