Arthritis: the best nutrients and nutritional advice to help prevent and treat it 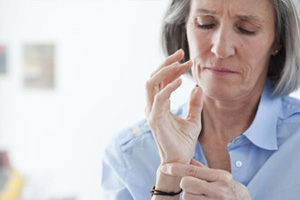 Arthritis is the most common inflammatory joint disease and seriously affects the quality of life of those who suffer from it. Can making dietary changes help? Which are the most beneficial nutrients for relieving the symptoms? Drawing on a review published in 2019, we’ve produced this update on the links between this widespread, disabling disease and nutrition.

Arthritis is a chronic disease which affects the joints, particularly the knees, hips, fingers and back. More specifically, it damages cartilage, the role of which is to reduce pressure when we move our joints (flexing the knee, for example). This abnormal wear and tear of cartilage can cause stiffness, deformity and varying degrees of pain in the joint. While treatments exist that can relieve the pain of arthritis, diet is sometimes said to affect its development.

The important role of carotenoids and polyphenols

A recent review (1) analysed the results of numerous studies, thus providing a global picture of the role played in the symptomatic treatment of arthritis by two large groups of compounds found in the diet.

In addition, consuming isoflavones, found in soybeans, encourages cartilage production. However, this effect was only observed in men.
Another study examining the effects of consuming dried strawberries and cherry juice (high in polyphenols) showed a link between polyphenol intake and pain reduction as well as an improvement in quality of life for arthritis-sufferers.

Note: polyphenols are present in food in many forms and are absorbed and used differently from one individual to another. In addition, the positive effect of polyphenols remains poorly understood and requires further investigation.

Can dietary supplements play a positive role in treating arthritis?

In addition to nutrients in the diet, researchers (2) recently looked at the effects on arthritis of a number of supplements. Of the 20 products investigated, seven were shown to result in a significant, short-term reduction in pain:

Four other supplements also improved pain, though the significance of their clinical effects was unclear:

According to the study, only two supplements were seen to have significant effects on improving pain in the medium term:

However, studies suggest that the role played by dietary supplements on the development and progression of arthritis, as well as on management of its symptoms, is debatable. It’s also important to remember that taking supplements for therapeutic use should be medically supervised to minimise any risk of unwelcome side-effects.

A definite link between diet and arthritis: weight loss

While studies conducted over recent years have produced promising leads in terms of diet and nutritional supplementation, the clearest link between diet and arthritis has been observed with weight loss. Excess weight and obesity are proven risk factors for the onset and progression of arthritis: a balanced diet, rich in fruits and vegetables, accompanied by weight loss, significantly reduces the likelihood of developing the disease and reduces joint pain and mobility problems.

The dose and form supported by Harvard clinical studies!

The essential painkiller for improving joint flexibility and comfort