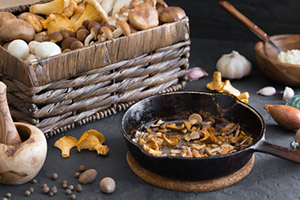 This is the claim made by a recent study (1) conducted in Singapore: eating in excess of 300 grams of cooked mushrooms a week could drastically reduce the risk of mild cognitive impairment! The researchers involved believe that it is ergothioneine, an antioxidant found abundantly in a large number of edible mushrooms, which is partly responsible for this beneficial effect.

Mild cognitive impairment manifests in the elderly as a decline in faculties such as memory, language, reasoning and judgement. While the deterioration is slight, it is more significant than that associated with normal ageing. At this stage, it does not involve any loss of autonomy or independence but it can often herald the onset of Alzheimer’s disease. A sizeable challenge which has been exercising scientists for many years as they seek to identify the causes of this more serious decline.

Under investigation: a specific compound found in mushrooms

This mushroom-associated benefit had already been highlighted in a previous study (2), particularly the effect of ergothioneine. This is a compound which the body is unable to produce but which is easily absorbed when consumed, mushrooms being the main dietary source. Its antioxidant and anti-inflammatory effects make it a valuable aid in fighting cellular ageing.

Carried out between 2011 and 2017, this latest study involved 633 Singaporeans aged 60+. In order to observe the effects of mushroom consumption, the team of scientists responsible carried out a careful assessment to establish those participants who were suffering from mild cognitive impairment. Along with standard neuropsychological measures such as IQ tests, they gathered other data from the volunteers including their medical history, dietary habits, weight, height, blood pressure, and grip strength …

They looked at six types of mushroom commonly consumed in this part of the world: enokitake (or velvet foot), oyster, shiitake, button, dried and canned.

The results were clear: eating in excess of two, 150 gram portions of cooked mushrooms a week could cut the risk of developing mild cognitive impairment by half! According to the researchers, even consuming a smaller amount of mushrooms each week may still produce benefits for cognitive function.

More specifically, the study suggests that a lack of ergothioneine (which is available in the form of ergothioneine supplements) could be a risk factor for neurodegeneration. Increased intake of this antioxidant, and therefore of mushrooms, could thus have a positive effect on cognitive ability. The next step? The research team is now looking to conduct a clinical trial using pure ergothioneine and other plant-based compounds such as tea extracts, to assess these ingredients’ potential for delaying cognitive decline.

A good reason, if ever there was one, for continuing to eat mushrooms in all their forms … the season for button mushrooms is all year round!