menuSubjects
Welcome   >  Antioxidants  >  Cabbage: a mine of...

Cabbage: a mine of health benefits 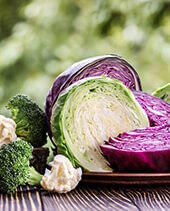 Green cabbage, red cabbage, white cabbage, curly kale, cauliflower, Brussels sprouts … cabbages come in a multitude of varieties, but for some reason, we often underestimate their benefits for our health. The truth is, they are veritable health foods. Packed with vitamins and active compounds, cabbages’ many virtues have been confirmed by several recent studies. Here we review the latest research into these cruciferous vegetables and their active compounds.

Many varieties with antioxidant and anti-inflammatory properties

The hundreds of different varieties of cabbage actually share many elements, including their exceptional properties. So concluded the authors of a study published in 2014 in the Asian Pacific Journal of Cancer Prevention1. Using spectrophotometric analysis, these scientists set out to evaluate the benefits of a number of cabbage varieties including white, red and Chinese cabbage as well as curly kale. They were particularly interested in the antioxidant potency and anti-inflammatory activity of the vegetable’s compounds. Their analysis produced highly positive results, confirming cabbage’s antioxidant and anti-inflammatory properties. These are linked to the presence of polyphenols, or more specifically, flavonoids. These are natural, powerful antioxidants, the effects of which are particularly beneficial in combatting oxidative stress, free radical damage and cellular ageing. The potential to prevent or treat certain diseases is thus one reason why scientists are keen to conduct research into cabbages.

Cabbages have been part of the human diet for thousands of years and have long interested scientists, many of whom have sought to identify the origin of their health benefits. While some of these benefits are due to their polyphenol content, others may be associated with the enzymatic activity of myrosinase. This enzyme is able to convert the glucosinolates present in cabbage into phytochemicals called isothiocyanates. Certain of these, such as indole-3-carbinol and sulforaphane, are attracting the attention of the scientific community for their therapeutic potential.

Present in many varieties of cabbage, sulforaphane has attracted scientific interest due to its powerful antioxidant potential. Unlike other antioxidants, sulforaphane is not immediately destroyed after interacting with free radicals. In addition to reducing damage from radical species, sulforaphane may also remain active for longer and thus participate in other reactions within the body. Some scientists believe it has anti-cancer effects, as reflected in a study published in 2012 in the Asian Pacific Journal of Cancer Prevention². Here, researchers measured sulforaphane’s anti-proliferative activity by analysing its effect on mechanisms of apoptosis (programmed cell death). They concluded that sulforaphane does indeed have an anti-proliferative effect which could be particularly beneficial in combatting the proliferation of cancer cells. Suffice to say that cabbages deserve a starring role in our diet!

These studies confirm cabbage’s many health properties. While further research is needed to assess the extent of its virtues, cabbage appears to deserve its status as a ‘superfood’ or functional food. Cabbage may have preventive and therapeutic benefits in relation to many chronic diseases. These benefits are linked to its high polyphenol content and the activity of sulforaphane, a compound found in abundance in broccoli.