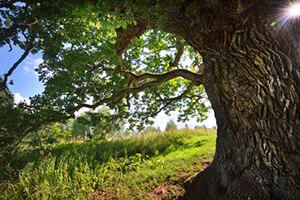 Did you know that oak wood contains powerful active principles? The oak tree - a symbol of immortality and fertility in many ancestral traditions - has indeed been used therapeutically for hundreds of years. Research has shown that it is its high polyphenol content, and more specifically, the presence of roburins, which account for the medicinal virtues of this sacred tree. Known for their natural antioxidant potency, these flavonoid compounds are responsible for oak wood’s many health-protective effects. Read on to discover more about the therapeutic potential of the French oak wood extract (Quercus robur): Robuvit®.

Antioxidant potency measured in vitro
In 2014, the benefits of the French oak wood extract Robuvit® were confirmed in an in vitro pilot study1. Researchers assessed the product’s antioxidant capacity using the Trolox Equivalent Antioxidant Capacity (TEAC) method. This measures the antioxidant capacity of a given substance, as compared to the standard, Trolox. In this case, the result was a very positive 6.37 µmol Trolox equivalent/mg of Robuvit.

Evaluation of the benefits of Robuvit® supplementation
Given the confirmed antioxidant potency of oak wood extract, scientists decided to evaluate the benefits of supplementing with Robuvit® among a group of 20 volunteers for a period of one month2. They measured a number of different parameters including markers of oxidative stress damage, activity of several antioxidant enzymes (superoxide dismutase, catalase, and glutathione peroxidase) and total antioxidant capacity in plasma.

Health-protective effects
At the end of the study, the researchers observed significantly increased activity in certain antioxidant enzymes as well as a rise in total antioxidant capacity of plasma. They also noted a significant decrease in serum levels of advanced oxidation of proteins and lipid peroxides. These results confirm both the antioxidant activity of Robuvit® supplements as well as their efficacy in protecting the body against damage caused by oxidative stress.

Evaluation of the liver-protective effects of Robuvit®
Based on the natural antioxidant potency of Quercus robur oak wood, researchers decided to examine its therapeutic potential, evaluating the effects of Robuvit® supplementation in patients with moderate functional hepatic failure2. Subjects were divided into two groups with comparable blood parameters. Of the 44 patients selected, 23 were supplemented with Robuvit® for 12 weeks.

Positive results seen from week six of supplementation
The researchers observed positive effects from the sixth week of supplementation. Compared with controls, supplemented patients displayed higher albumin levels, decreases in which are characteristic of moderate functional hepatic failure. They also noted other beneficial effects, including:

- lower levels of phosphatase alkaline, aspartate aminotransferase and alanine aminotransferase. High concentrations of these molecules are seen in liver disease;
- improved levels of bilirubin, a pigment produced by the breakdown of haemoglobin, concentration of which increases in certain liver problems;
- a decrease in plasma free radicals, reactive species that damage cells;
- a slower rate of sedimentation, indicating a reduction in the inflammatory process.

Published in 2016 in the journal Minerva Gastroenterologica e Dietologica, these results appear to confirm that French oak extract has both liver-protective and anti-inflammatory effects.