Berberine: a dream come true for diabetics and those with high blood pressure

More and more of you are sending us your testimonies on the subject of berberine, a substance extracted from barberry which has a miraculous effect on lowering blood sugar and cholesterol levels. We couldn’t resist publishing one of these accounts, sent to us by Marie, a 54 year-old diabetic, who describes what happened when she took a course of berberine supplements, and poses a very interesting question: essentially, how does berberine work? 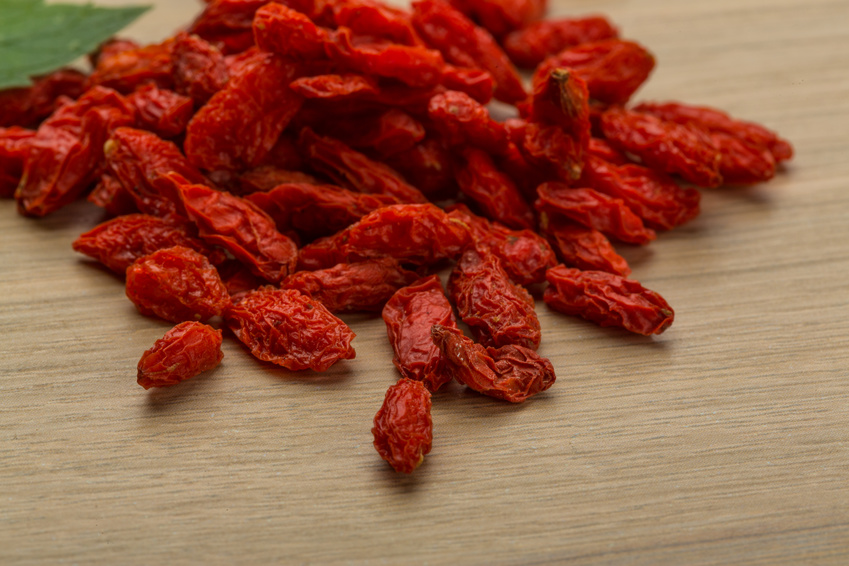 I was diagnosed with type 2 diabetes a few months ago. My doctor immediately prescribed metformin ( a drug sold under the name of Glucophage, Stagid and generic forms – Ed. ), but I had a very bad reaction to the treatment: I had severe lactic acidosis and ended up in hospital. Only one of my kidneys works properly and I can’t tolerate certain drugs.
My doctor then told me about a natural compound, berberine, which seemed to be one of traditional Chinese medicine’s best remedies. To start with, I wasn’t that excited about it, but after doing some research, I discovered numerous studies which showed that berberine supplements were at least as effective as metformin. I therefore ordered 3 pots of berberine from Supersmart (this was the first website I came across but the customer reviews were very complimentary). I didn’t have much to lose in trying it. And as diabetics have regular check-ups, it would be easy to tell if it was working or not. If it worked, my husband wouldn’t be able to say it was all in my head: the tests would speak for themselves.

My doctor agreed that I should have a test 6 weeks after I first started taking the supplements. And to my great surprise, I found that my fasting glucose levels had dropped from 270-310mg/dl to 170-90mg/dl. The results were the same 6 weeks later and there were obvious signs that my health was improving: I was less tired, I wasn’t waking up so much at night to get a drink or go to the toilet, I had more motivation. I have now finished my 3-month course of supplementation but with my doctor’s approval, I’ve decided to carry on taking berberine every day, and I thank you from the bottom of my heart. My only regret is that my doctor wasn’t able to give me a clear explanation as to the mechanisms of action of this natural substance. And I haven’t found anything on the websites I’ve consulted either … My question therefore is: how does berberine work?”

Yes, berberine has been shown to be as effective as metformin in numerous clinical trials

Before addressing Marie’s question, let’s focus for a moment on her remark: “I discovered numerous studies which showed that berberine supplements were at least as effective as metformin. ” This is absolutely correct.

A recent meta-analysis (1) - a kind of ‘super-study’ which reviews all the serious research published on a subject – confirmed in February 2015 berberine’s efficacy for “improving type 2 diabetes” , “improving hyperlipidaemia” and “reducing hypertension”, without causing the slightest side-effect! This ‘super-study’ drew on 27 clinical trials, ie, tests conducted on humans. An earlier meta-analysis (2) published in 2012, had also shown that berberine produced “beneficial effects comparable to hypoglycaemic drugs, but without their side-effects”.

These conclusions are, in fact, ‘re-discoveries’ rather than new ones. Proponents of traditional Chinese medicine have long been familiar with berberine; it has been recognised by TCM for over 3000 years as being highly effective for ‘purifying the blood’ and ‘preventing heart disease’.

“So how does berberine work?”

So let’s now look at berberine’s mechanisms of action.

If Marie’s doctor was unable to explain how it worked, it wasn’t because he was incompetent. In his defence, berberine’s mechanisms of action have been something of a mystery for some time. We knew it worked but there was no rational explanation as to why. It’s taken the last ten years to properly comprehend the processes involved, but here again, the mechanisms are so complex that it’s far from easy to explain them in simple terms.

It’s often believed that diabetics have high blood sugar because their cells are not responding to insulin properly and they’re not able to use this energy reserve correctly. In fact, this is only part of the problem. Diabetics have high blood sugar levels even when fasting. The excess sugar comes not from the diet (since they’re not eating anything) but from their own production of glucose from fats and muscles (a process called ‘gluconeogenesis’).

To put it more simply, imagine a bathtub half-full, with a tap turned on raising the water level, a plug that prevents it leaking away, and a shower head placed in the bottom of the bathtub. 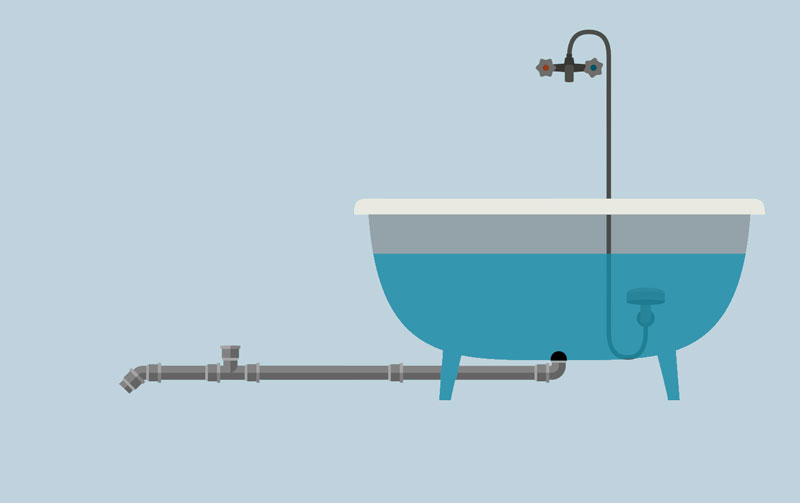 The water level represents the glycaemia: it must be stable at all times, high enough for the bathtub not to be empty, and low enough to prevent it from overflowing.
The tap representsthe supply of sugar from the diet: it only gets turned on when we eat. The higher the sugar content of the meal, the stronger the flow from the tap.
The plug in the bottom maintains the amount of water in the bath: when the tap’s running, the plug lifts a little to let out excess water. In the body, it’s insulin that helps this plug work properly. It facilitates the entry of excess sugars into neighbouring cells which are able to convert them into energy or store them for later use.

So when a healthy person eats a meal, the tap is running and at the same time, the bath plug lifts to let out the excess sugar. 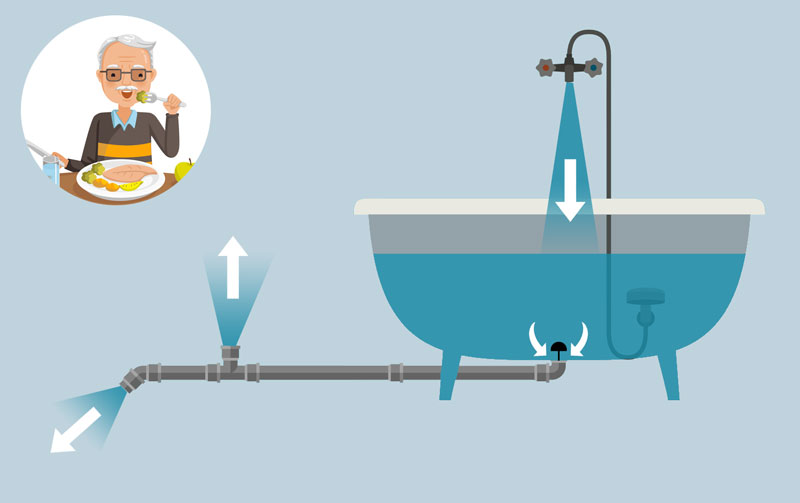 In diabetics, however, this plug does not lift as it should. As a result, if the tap is running for too long or the flow is too strong (high sugar consumption), the bath cannot maintain a stable level of water and it rises to dangerous levels. But that’s not the only issue! Diabetics also have a problem with their ‘shower head’ …

In a healthy person who hasn’t eaten for a while (after a good night’s sleep, for example), the level of bath water tends to go down because there are always leaks and cells continually need glucose. To remedy this, the body produces sugars from the proteins it’s digested or that it finds in muscles, as well as from previously-stored fats. And it puts them back into the bath! The shower head’s turned on and the bath water rises slowly till it reaches an optimal level, after which the shower head is turned off.

In people with diabetes, the showerhead doesn’t turn off: it stays on all the time. That’s why, when diabetics wake up, the water in the bath is too high even though the tap’s been turned off for more than 10 hours!

This problem of the bath always being too full poses problems for diabetics not only in the short-term (the ‘overflow’ risk manifests in discomfort and episodes of hyperglycaemia) but in the long term too, as the bath is not built to support such a heavy weight of water (gradually deteriorating nerves and blood vessels are responsible for a great many diseases). 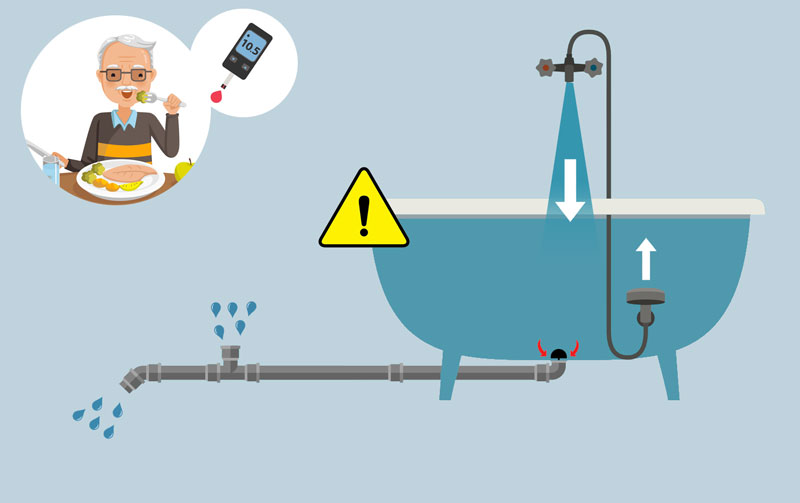 So how does berberine fit into all this? It acts in three ways to remedy this situation.

1) Firstly, it helps ‘lift the plug’, by increasing the secretion and efficacy of insulin (3).

This additional insulin secretion makes it easier for the excess sugars to enter cells and thus lower the ‘bathwater’. Not only that, but it also helps inhibit a whole range of metabolic processes which aggravate type 2 diabetes and insulin-resistance…

In a pioneering study published in 2006, Professor Jiming Ye had already demonstrated this first mechanism of action (4): “studies conducted on animals and humans with diabetes show that berberine activates an enzyme present in the muscles and liver. This enzyme is directly involved in improving sensitivity of tissues to insulin – the hormone that helps lower blood sugar.”

2) It then establishes a siphon system in the pipes to ‘suck’ the excess water from the bath and make it empty faster.

In scientific terms, it stimulates glycolysis, a process whereby glucose is broken down to produce energy. It improves how cells use sugars , and thus accelerates the breakdown of those sugars, clearing the blood vessels more rapidly.

3) And last but not least, it helps reduce the flow from the shower head which fills the bathtub from below (5-6).

In fact it slows down the production of glucose in the liver from non-carbohydrate compounds (the previously mentioned gluconeogenesis which is highly problematic for diabetics) (7).

If you’d like to look at each of these mechanisms in more detail, you can read this study on the anti-diabetes mechanisms of berberine(8) (in English).

In the meantime, the result of these three mechanisms is unstoppable: the bathwater goes down, and this is inevitably reflected in the blood tests of diabetic patients.

Why is Supersmart’s berberine so effective?

When you read the reviews of customers who use this particular berberine product, you’re struck by the passion and enthusiasm it induces. For many of them, the positive results are confirmed in their blood tests (with decreased levels of cholesterol, triglycerides and blood sugars) and some of them even mention its superior efficacy compared with other berberine supplements they’ve tried.

In fact, what sets it apart from other supplements is its purity: the extract of Berberis vulgaris we use is standardised to 97% berberine, the highest percentage you’ll find on the market. In addition, the dose (2 x 500mg capsules a day before each meal) corresponds to that used in the majority of clinical studies.

It’s natural-source, clinically-supported, with empirical evidence dating back thousands of years, and attracts glowing reviews: if you haven’t yet tried this rare gem, it’s no doubt because you don’t suffer with diabetes or cholesterol problems. But you should know that it also acts against two other widespread and unwelcome factors in modern diseases: inflammation and oxidative stress. 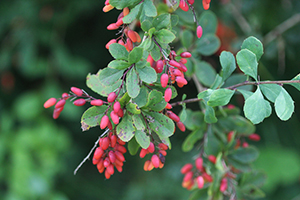 Diabetes in complete remission following several months’...
“ There’s no cure for diabetes. It’s a chronic disease for which lifelong medication is necessary .” You’ve probably heard this a thousand times, but...
Read more
Follow us