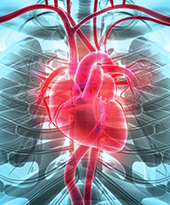 Scientists have discovered that vitamin K1, high levels of which are found in green vegetables, helps to maintain the size of the left ventricle of the heart which contains oxygenated blood for distribution around the body. In the absence of sufficient vitamin K1, this ventricle becomes enlarged and is less efficient at pumping blood, eventually leading to fatal cardiac problems.

The study showed that the higher a person’s levels of vitamin K1, the lower their risk of developing an enlarged heart, an association detected as early as adolescence. The scientists observed ventricular hypertrophy in 10% of the adolescents they studied, highlighting that from the youngest age, diet plays a decisive role in dictating future health. Lifestyle factors such as hypertension may subsequently contribute to the development of an enlarged heart.
It’s an important discovery in as much as only 25% of the adolescents examined had a vitamin K intake in line with the minimum level recommended, and 30% of deaths in Western countries are cardiovascular in origin. Previous research has demonstrated that vitamin K plays a protective role against atherosclerosis and cardiovascular disease1,2. In fact, vitamin K deficiency may be linked to an increased risk of arterial calcification3. It has also been shown that taking vitamin K1 supplements can delay the progress of such calcification and reduce the loss of arterial elasticity4.

The problem is that vitamin K is found in dark green vegetables such as spinach, broccoli and asparagus – foods that are not always the first choice for adolescents. In the over-50s, the group most at risk of cardiovascular problems, the problem is more one of malabsorption. In both cases, vitamin K supplementation may prove beneficial (especially if the formulation contains the most bioavailable forms of vitamin K such as is the case with Complete K) in preventing dire and irreversible problems in the future. What’s more, no unwelcome side-effects are associated with vitamin K supplementation, even at very high doses taken for one to two years. A ‘big heart’ may be associated with kindness and compassion, but in medical terms, ‘small’ is better: supplementing with vitamin K provides a simple solution. .

Complete formulation – the three most bioavailable forms of vitamin K