menuSubjects
Welcome   >  Liver  >  Preventing some of the...

Preventing some of the harmful effects of alcohol 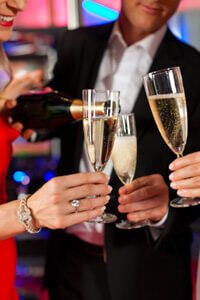 The festive season means many more occasions for consuming alcohol. While champagne or wine drunk in moderation can have some beneficial health effects, they can also be extremely harmful. Although nutritional supplements can help to limit some of these undesirable effects, moderation should always be the rule.

When you drink a glass of wine

When you drink a glass of wine, the alcohol passes directly through the stomach and intestine and is rapidly distributed throughout the body.
95% of ingested alcohol is metabolised primarily in the liver, the remainder being eliminated via the respiratory pathway and urine. But the liver can only neutralise a certain amount of alcohol at any one time and any surplus in the bloodstream has a disruptive effect on the brain, heart, muscles and other body tissues.

The first stage in the process of alcohol metabolism in the human body is its dehydrogenation into acetaldehyde, a highly toxic substance.
Oxidation of alcohol occurs only in the liver and involves several enzymatic mechanisms.

Alcohol oxidation triggers a surge in free radical generation. In addition, acetaldehyde disrupts the liver’s antioxidant defence system, inhibits the repair of alkylated nucleoproteins, reduces oxygen use in mitochondria and induces lipid peroxidation. Free radical mechanisms also appear to be involved in the toxicity of ethanol on various extrahepatic tissues, in particular, the gastric mucosa, the central nervous system, the heart and the testicles.

Disruption to the metabolism of micronutrients

Alcohol impairs the body’s absorption, transport, activation and storing of essential micronutrients such as vitamins. In addition, the metabolism of alcohol not only generates free radicals and potentially toxic metabolites but it also consumes vitamins. Epidemiological investigations confirm that those who drink alcohol have a higher incidence of vitamin deficiency, with the folates and vitamins B1, B6, PP, D and E most at risk.

The effects of alcohol consumption on plasma concentrations of antioxidant micronutrients (vitamins E and C, carotenoids and selenium) and on markers of oxidative stress such as malondialdehyde and Schiff bases were evaluated in 417 control subjects (317 consuming less than 33g of alcohol a day and 100 more than 33g a day) and 102 alcoholic patients consuming an average of 194g of alcohol a day. Results showed that alcohol consumption significantly reduced plasma levels of antioxidant micronutrients.

Human and animal studies have indicated that chronic alcohol consumption results in significant reductions in levels of glutathione, the liver’s major natural antioxidant.

SAMe, or S-adenosylmethionine, plays a particularly important role in liver biochemistry. It is the product of a biochemical reaction between ATP and methionine. Almost half the body’s methionine is used in the liver to produce SAMe, a significant proportion of which is itself converted into glutathione.

Alcohol consumption reduces levels of an enzyme necessary for the conversion of methionine into SAMe. In 1991, a study conducted by Spanish researchers confirmed SAMe’s ability to be converted into glutathione. While alcohol drastically reduces levels of glutathione, the study also showed that if SAMe supplements are absorbed at the same time as alcohol, glutathione levels can be maintained.

Deficiency in SAMe can predispose alcoholics to cirrhosis of the liver. Supplementing with SAMe enables hepatic levels to be restored and reduces parameters of ethanol-induced liver damage such as an increase in circulating transaminases or mitochondrial injury.

In a placebo-controlled study, 16 patients with liver disease, both alcoholic and non-alcoholic, were given 1200mg of SAMe a day for six months. Liver biopsies showed a significant increase in levels of glutathione and a decrease in oxidised glutathione. In the non-alcoholic, liver-damaged subjects, alanine aminotransferase, a liver enzyme indicating damage, was reduced.

In a study in which 45 patients with alcoholic liver disease were given an intravenous injection of SAMe for 15 days, liver function was clearly observed to have improved.

Neutralising the toxic effects of acetaldehyde

The primary mechanism enabling acetaldehyde to be neutralised uses sulphur-based antioxidants, the two most important being cysteine, an essential amino acid, and glutathione, a polymer with three amino acids. Cysteine and glutathione are effective at combatting acetaldehyde because they contain a reduced form of sulphur called sulfhydryl group, with an atom of sulphur bound to one of hydrogen. This powerful mechanism for detoxifying acetaldehyde is, however, easily overwhelmed by relatively large amounts of alcohol such as are typically consumed in alcoholic drinks. Fortunately, it is simple to boost levels of sulphur-based antioxidants with nutritional supplements.

In an experiment on rats, a dose of acetaldehyde - which in other circumstances would have been enough to kill the animals - was completely blocked by preventive treatment with cysteine and vitamins B1 and C. In other words, none of the animals treated with cysteine died from what was a lethal dose of acetaldehyde. N-acetyl-cysteine provides equally effective protection as cysteine.

Vitamin C is needed to maintain cysteine in the reduced state in which it is effective against acetaldehyde.

Vitamin B1 or thiamine and alpha-lipoic acid are also involved in acetaldehyde detoxification but levels of these substances are also reduced by alcohol consumption. Researchers evaluating the effects of vitamin B1 showed that it protected against acetaldehyde toxicity when combined with vitamin C and cysteine. Alcoholics are often deficient in vitamin B1 though it is unclear whether this is due to an alcohol-induced reduction in intestinal absorption or to thiamine being destroyed by acetaldehyde.

Standardised extract of silymarin is a potent antioxidant, widely used throughout Europe for treating liver disease. It protects the liver from alcohol-induced damage, particularly reductions in glutathione levels in the liver. One month’s supplementation with silymarin has been shown to increase hepatic glutathione levels by 35%.

An appropriate combination of antioxidants, including vitamins E, C and B1, cysteine, selenium and N-acetyl-cysteine, when taken at the same time as alcohol is consumed or before you go to bed in an inebriated state, can be effective at preventing some of the harmful effects of alcohol such as cell damage or a hangover.

8 to 10 times more potent and better absorbed than silymarin

Combatting chronic constipation and maintaining a healthy...
Louis XIV famously suffered from severe constipation and his doctors would regularly ask him: ”Comment allez-vous (How are you)?”, when what they actually meant was:...
Read more
Follow us