The liver: the benefits of berberine for non-alcoholic hepatic steatosis 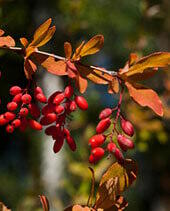 How much do you know about non-alcoholic hepatic steatosis? Are you aware, for example, that it is considered one of the most common liver diseases in Western countries? According to some experts, this disorder – more commonly known as non-alcoholic fatty liver disease or NAFLD - is a major cause of cirrhosis and liver failure, and should definitely not be taken lightly. Caused by an accumulation of fat in the liver, it is directly linked to other health problems such as obesity, hyperlipidaemia, hypertension and type 2 diabetes. As yet, there are no specific treatments, but a recent scientific study has opened up some promising new perspectives. Let’s take a closer look.

A plant for combatting NAFLD

Published in the journal Hepatitis Monthly1, the study focused on a plant common in Iran: berberine or berberis vulgaris. Part of the Berberidaceae family, this plant is known for its use in traditional medicine. A number of studies have shown that it contains at least 22 alkaloids, as a result of which it is able to positively influence the lipid profile, insulin sensitivity and weight loss. The Iranian scientists behind this study were particularly interested in its potential benefits for the liver, hoping to find scientific evidence to confirm their hypothesis that it can fight NAFLD.

Evaluation of the effects of berberine supplementation

In evaluating berberine’s potential benefits for the liver, the researchers looked at how the plant affects liver enzyme levels which tend to increase in NAFLD. They monitored 80 patients – 32 men and 48 women - who at the start of the study had presented with excess fat in the liver and increased levels of liver enzymes. They were either given two, 750mg capsules of berberine a day, or a placebo. The researchers monitored the effects of the supplementation for three months, measuring the subjects’ weight, lipid profile and levels of certain liver enzymes.

After three months of supplementation, the results were encouraging. Berberine-treated subjects displayed lower levels of the liver enzymes alanine transaminase and aspartate transaminase, as well as decreased triglycerides and cholesterol, and significant weight loss. These preliminary findings suggest that berberine may indeed represent a potential new approach to treating NAFLD.

This new study adds weight to the growing interest in the benefits of this medicinal plant. While research had already been conducted in relation to type 2 diabetics, these new findings expand berberine’s spectrum of activity, suggesting it may be beneficial for all those at risk of NAFLD – whether from hyperlipidaemia, hypertension or obesity. The natural virtues of this plant can now be obtained in the form of a dietary supplement called Berberine, available from the Supersmart catalogue.