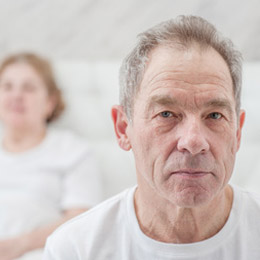 Question:
How can you increase your testosterone production naturally?

Answer:
There are several nutrients and supplements available to help men increase both their endogenous production of testosterone and the levels of active testosterone circulating in their bloodstream.

For most men over 60, such a strategy is virtually essential. It can also be very helpful for certain sportsmen, diabetics and men carrying excess abdominal weight.

Why is testosterone so important for men?

First of all, it’s important to note that men are men primarily because of testosterone. It plays a key role in the development of male sex characteristics during adolescence, it ensures masculine aspects are maintained throughout life (muscle mass, body and facial hair, voice pitch, libido, functioning of the sex organs, distribution of fat …) and it also helps the central nervous system function healthily (well-being, mood, fulfilment, motivation, resistance to fatigue …). Less well-known is the fact that testosterone also affects other important areas of health such as maintaining bone structures, increasing physical performance, ensuring healthy spermatogenesis and supporting protein synthesis …

The problem is that with advancing age, there is a decline in circulating levels of testosterone. Unlike the menopause in women, the hormone changes in men do not appear suddenly at the age of 50 or so: levels of testosterone decrease slowly but surely from the age of 30 (there’s a fall in active testosterone of about 2% a year) until what’s known as the ‘andropause’, marked by the onset of physical and mental symptoms.

Some men reach this stage very quickly while others experience no symptoms until they’re beyond the age of 60. Broadly speaking, we know that testosterone production in a 70 year-old male is 30-50% lower than that of a young man.

What are the consequences of age-related testosterone deficiency?

This fall in testosterone production has a clear impact on a man’s physical and mental health. There’s a whole range of symptoms directly or indirectly linked to this decline:

So why does testosterone production decline?

Testosterone is produced by Leydig cells in the testicles from mitochondrial cholesterol. This production is controlled by two hormones generated by the pituitary gland in the brain. The testosterone is then converted by two enzymes, one called 5α reductase, which reduces it into dihydrotestosterone or DHT, and the other aromatase, which produces oestradiol (a feminising oestrogen). The remaining testosterone is transported in plasma.

The fall in circulating levels of testosterone may therefore be linked to a decline in endogenous production in the testicles, to disruption in the pituitary gland, and/or to an increase in activity of 5α reductase and aromatase.

There are 3 major risk factors that predispose towards a more rapid decline in testosterone levels:

The best supplements for increasing blood levels of testosterone

Using natural products and supplements to take care of your testosterone levels is by no means an outlandish idea: they are officially recognised for increasing blood levels of testosterone by the European Urology Association (14).

Most of these products work in two ways:

This is the most widely-studied and commonly-used extract for increasing testosterone levels and treating benign prostatic hyperplasia, one of the most frequent consequences of hypogonadism. It contains several beneficial active principles which inhibit 5α reductase (15-16) and which therefore increase the amount of usable testosterone: campesterol, betasitosterol, stigmasterol, lauric acid and oleic acid.

Administration of a 160mg dose of a lipid extract of Serenoa repens, twice a day for at least six months, was shown to significantly improve several parameters associated with age-related testosterone deficiency (17-20) in a number of good quality studies (21-24) .

Tribulus terrestris also contains compounds with the potential to improve serum testosterone levels: furostanol, dioscin, diosgenin and protodioscin. These micronutrients work in a different way from Saw Palmetto: they influence the hypothalamus by increasing secretion of luteinising hormone (LH) which leads to an increase in testosterone production.

In several studies (25), administration of an extract of Tribulus terrestris (500mg, several times a day) was thus shown to increase testosterone production, and as a consequence, production of DHT and DHEA too. It also stimulates androgen receptors in the brain which results in greater LH secretion and thus testosterone. However, it appears that Tribulus is only effective in men who are genuinely deficient in testosterone and will not raise levels beyond physiological thresholds, a goal sometimes pursued by elite sportsmen.

Extracts of blue passion flower, propolis and royal jelly share a common factor: they all contain the flavonoid chrysin, a powerful inhibitor of aromatase, the enzyme which accelerates the conversion of testosterone into oestradiol (26). It also works by stimulating testosterone production. (27).

The only problem is that chrysin has very low bioavailability, limiting its testosterone-raising efficacy. Passion flower extract therefore has to be combined with other compounds that increase its bioavailability such as piperine (28-29).

Inadequate zinc status (now widespread among Western populations) has been shown to be associated with decreased blood levels of testosterone and low sperm concentrations. This is because zinc is an aromatase inhibitor. It may also play a role in testosterone production though the mechanism responsible has yet to be established (30-31).

One study of zinc-deficient men showed that six months’ supplementation (30mg zinc a day) led to a doubling of serum testosterone levels (32).

Research has clearly demonstrated that a lack of vitamin D also restricts testosterone production (33-35). It’s no surprise then that supplementing with vitamin D helps increase circulating levels of testosterone (36).

Given the widespread prevalence of serious vitamin D deficiency across the globe (particularly in higher latitude countries in Europe, Canada and the US), vitamin D supplementation is probably one of the key supplements to prioritise for boosting testosterone. All the more so as supplementing with vitamin D offers countless other health benefits !

While this extract does not have the same level of scientific support as those mentioned above, the latest studies do show that the eurycomanone it contains is able to increase serum levels of testosterone (37-39). In one study where supplementation was administered for eight weeks, researchers observed both an increase in testosterone levels, and a 5% rise in lean mass (40). Two mechanisms of action may be responsible for these improvements: inhibition of aromatase and secretion of LH and FSH (follicle-stimulating hormone) in the pituitary gland.

Other supplements with the potential to affect testosterone are still being investigated, such as Astragalus root (Astragalus membranaceus) (41), fenugreek extract (42), Mucuna pruriens extract (43-45), Rhodiola rosea extract and nettle root.

Two formulations have fortunately been developed which incorporate the majority of these ingredients, so avoiding the need to take multiple supplements:

Improved formula with extract of bulbine and divanillyltetrahydrofuran