Age-related muscle weakness: what you can do to prevent it 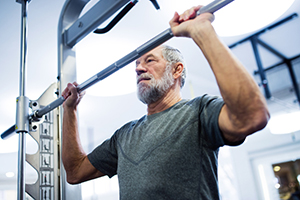 With age comes a gradual decline in muscle mass. This is the result of a reduction in volume – or even complete loss - of muscle fibres. But not everyone is affected equally: those who adopt good dietary habits and have a healthy lifestyle suffer much less than other people. What tips should we be taking from such individuals?

Improve your circulation with weight training and flavonoids

Over time, muscles become thinner, resulting in reduced strength and increasing the risk of falls, fractures and even cognitive decline. A team of researchers at Nottingham University has demonstrated the two mechanisms involved (1). Firstly, it appears that insulin (a hormone released when we eat) becomes less effective over time at stemming muscle breakdown. Secondly, there’s a decrease in the efficacy with which nutrients and hormones are delivered to muscles, even though they appear to be consistently well-absorbed by the body throughout life. This defective supply is actually caused by a dramatic decrease in blood flow: the nutrients are there, but the blood vessels are not healthy enough to transport them to cells.

To restore good blood flow and prevent nutrients from being wasted, the study’s authors highlight the benefits of weight-training in older people with circulation problems. “ After engaging in three sessions of weight training a week for five months, blood flow in the legs became virtually identical to that of young people”, said Professor Michael Rennie, though he conceded that “ there are other ways of improving the circulation”. These include prioritising foods and supplements that contain flavonoids, particularly rutin and quercetin. These plant compounds offer tremendous antioxidant, anti-inflammatory and vasoprotective properties. They strengthen blood vessel walls and reduce their permeability, so improving blood flow.

They’re found in eucalyptus, ginkgo biloba, buckwheat, the peel of citrus fruit and apples, capers, grapes, cherries, and blackberries, and at greater levels in dietary supplements such as Super Quercetin and Ginkgo Biloba 60 mg.

A recent study (2) showed that just two weeks of complete immobility is enough to reduce muscle strength by 25%-30%, which equates to ageing 30 years in a few days. This loss of muscle can occur at any age but is more dramatic in older people with less muscle mass (1kg less of muscle per leg). What’s worse is that it’s always harder to gain muscle mass than to lose it – on average, it takes three times as long to build muscle as to destroy it!

The same thing happens if for whatever reason, you stop exercising at any point in your life. The longer you wait to start again, the harder it is to get back into good physical condition and the less motivated you are to do so. It’s a vicious circle which can lead to sarcopenia. That’s why it’s important not to stop exercising for too long a period. If you’re no longer engaging in regular, moderately-intense physical activity but would like to do so before your muscle loss becomes too great, you should know that not all exercises offer the same benefits. “ Cycling, for example, is not enough to restore your original muscle strength”, explains study author Andreas Vigelsoe, “It will restore muscle mass and an adequate level of fitness but if you want to regain muscle strength, you have to do some resistance training”. It’s therefore vital to incorporate this type of exercise, or an activity that includes it, into your programme, making sure, of course, that you stick to it!

Use massage to help rebuild muscle

Researchers have discovered why sportspeople rate massage so highly (3). Massage was known to help relieve muscle tension and pain, but what wasn’t known was that it produced genuine, measurable biochemical effects. “No-one had ever looked inside the muscle to understand what was happening during a massage”, explained study author Justin Crane. To do just that, he and his team asked volunteers to first engage in intense physical activity for 70 minutes, and then have a short, 10-minute leg massage, after which the researchers took a muscle biopsy to measure the potential effects. The results were extraordinary. “I didn’t think that such a short massage would produce such a remarkable change“, said Crane. It appears that the massage not only triggered the release of biochemical factors capable of reducing inflammation, but also improved the efficacy of mitochondria, the elements in cells that convert energy from food.

This is an excellent reason for recommending massage for those aged over 60 since muscle loss is associated with both mitochondrial dysfunction and the process of inflammation.

Fans of bodybuilding are right: vitamin E is a key element in rebuilding muscle. Researchers have recently demonstrated that vitamin E, known to be a potent antioxidant, plays a key role in cell membrane regeneration (4). How does this relate to rebuilding muscle? When particularly heavy demands are made on our muscles, the resulting damage to muscle cell membranes stimulates the production of stronger cells that are better able to resist future such demands. This is the famous ‘no pain no gain’ theory. This muscle fibre repair is controlled by vitamin E: being fat-soluble, it’s thought the vitamin penetrates the cell membrane where it protects precious phospholipids against free radicals. This protection is all the more important given that exercise requires considerable energy and thus results in the generation of significantly more free radicals. In the absence of sufficient vitamin E, when a cell membrane tears it is difficult to rebuild the cell and it may even die. If such an imbalance persists over a long period, muscle loss increases and results in atrophy, a condition in which cell membrane tears become more and more frequent …

Several studies had previously shown that a diet low in vitamin E in older individuals contributed to muscle weakness and inflammation. It therefore makes sense to prioritise vitamin E-rich foods such as almonds, hazelnuts, pine nuts, peanuts, walnuts, avocados and spinach. Vitamin E supplements are also recommended, though it’s important to choose natural forms such as Natural E 400 which are twice as effective as synthetic ones.

Researchers at the University of Iowa recently discovered another possible explanation for age-related muscle loss (5). In individuals suffering such muscle loss, a specific protein is found called ATF4 which may alter the activity of genes related to muscles, potentially reducing protein synthesis in muscles.

At the same time, the researchers identified a natural molecule capable of counteracting the action of ATF4: ursolic acid. It seems this plant compound found in apple peel deactivates the group of genes activated by the transcription factor ATF4, thus neutralising its destructive power. To test this hypothesis, the researchers gave food containing ursolic acid to elderly rodents with muscle weakness. They observed a 10% increase in muscle mass in the animals fed ursolic acid compared with controls, and more importantly, a 30% rise in the strength and quality of their muscles! According to Christopher Adams, lead author of the study, “These results suggest that ursolic acid is a potential tool for fighting age-related muscle weakness. By reducing the activity of ATF4, ursolic acid enables cells to recover more quickly from the effects of ageing“. Ursolic acid is found in apple peel, rosemary, holy basil, and sage, as well as in the natural supplement Ursolic Acid formulated exclusively from Japanese loquat leaves.

A group of experts has carried out a systematic review of the scientific literature to establish the most effective dietary compounds for preventing muscle loss (6). Unsurprisingly, they found low protein consumption to be associated with a marked decrease in muscle mass and muscle strength. Supplementing with proteins or amino acids may thus help maintain muscle mass and protect against sarcopenia. In particular, the branched chain amino acids (BCAAs) valine, leucine and isoleucine enable the release of more insulin, necessary for optimal protein synthesis, and reduce the breakdown in muscle which occurs during exercise.

Like proteins, BCAAs act as anabolic stimuli with direct effects on protein synthesis. While a gradual decline in their consumption is seen in ageing, researchers have shown that our requirements for them actually increase since the anabolic response gets weaker with age … A good solution would therefore be to increase protein intake (prioritising plant sources to prevent cardiovascular risks) or to take a BCAA supplement containing the right proportions of leucine, valine and isoleucine.

The three branched-chain amino acids in the ideal ratio of 2:1:1.