11 seconds: that’s all the time you get to explain why you’ve come to see your doctor 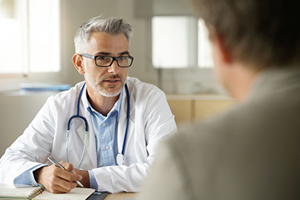 “So, why have you come to see me today?”, asks the doctor. It’s a key moment in the consultation. The moment when patients are supposed to describe their problems in detail. Their symptoms, concerns, pain, feelings, impressions, effects on their daily life, work, family and social relations …

Unfortunately, however, this window of opportunity lasts for just 11 seconds on average before the doctor interrupts and takes over the consultation. At least that’s the conclusion of a research team after they conducted an analysis of the first few minutes of doctor-patient consultations. In 54% of cases, doctors did not allow their patients the chance to freely express themselves, preferring to ask them closed-ended questions (which simply require a yes or no answer such as “Are you in pain?” or “Are you sleeping well?”).

Are we moving towards a dehumanisation of conventional medicine?

Twenty years ago, studies revealed that the length of this opportunity, while still very short, was a considerably longer 21 seconds on average, suggesting that modern medicine is indeed heading down a dehumanising path. With certain exceptions, it seems as if the patient’s account is seen as less and less valid. This is in contrast to the prescribing of drugs, and in particular, the ordering of further tests, which are at an all-time high. Nowadays, it is these tests that tell the story rather than the patients themselves. But it’s a story which is only interested in biological disorders or morphological objectives, ie, measurable factors, and fails to take into account more subjective issues such as stress, worry, chronic stomach pain, sleep and mood problems, compulsive behaviour … Anything, in fact, that doctors might consider to be minor symptoms which take up too much of their time and are ‘tough to crack’. This is why more and more of them are choosing to avoid these ‘trivial’ issues, in the belief that they can wait till the following day, week, or even indefinitely. But they’re making a big mistake: individual health, human relations and environmental factors (diet, stress, personal aspirations) are always interconnected.

If someone is more tired than usual, is it because they’re ill, have a family problem, or are overworked? Or perhaps all three at once? If they’re complaining of stomach pain, is this due to illness, or to anxiety which, in lowering their pain threshold, is highlighting pain which the brain would otherwise not perceive? How can doctors fully comprehend these minor problems and suggest suitable treatment options if they only allow their patients 11 seconds in which to talk about them? The doctor’s role would normally consist of listening to his or her patients in a non-judgemental way to allow them to ‘get things off their chest’. This is not so that the doctor can select the best drug treatment, but so he or she can help the patient put things into perspective, identify what might be a pathological, as opposed to normal, physiological process, and suggest simple, accessible treatments. In short, to use his or her clinical experience as well as medical (and human) skills to address each patient’s unique story and health issues.

What’s currently happening in doctors’ surgeries is a long way from this scenario. Packed waiting rooms and the speed with which consultations are conducted are leading to huge frustration. Frustration at not being able to say everything you want to say, of only having the physical aspects of your problems taken into consideration and of not being understood, and sometimes even being judged. “When I told the cardiologist about the natural treatments I was using, he started to laugh and tease me, and made me feel naive for believing in these self-help methods”, admits Francoise, a fan of phytotherapy. Essentially though, doctors are not to blame: the system that educates them is characterised by over-prescription of drugs, which makes you wonder whether these medicines primarily benefit those who prescribe and manufacture them. It is this broken system that forces doctors to work up to 60 hours a week without giving them the resources necessary to ensure that the individual patient takes centre-stage in their deliberations…. And the situation could deteriorate even further in the years to come with the anticipated shortage of doctors, and in some parts of the world, calls for the cost of a consultation to rise in line with the number of problems a patient has.

To satisfy their need to be properly listened to and understood, many people are now turning to other kinds of health practitioners who recognise the roles that diet, stress management and lifestyle play in mental and physical health. The treatments they offer include psychology, acupuncture, nutritional expertise, naturopathy, hypnotherapy and other branches of ‘alternative health’, the majority of which have been around for thousands of years. It’s no coincidence that such practitioners are generating high levels of satisfaction and enjoying soaring popularity: while modern medicine appears to have forgotten the benefits of really listening to patients, traditional medicine has not. And scientific evidence of its efficacy is gradually adding to existing empirical evidence...


Study at the centre of this article